I learned last night just before bed that the Senator had succumbed to his brain tumor. May he rest in peace, and I pray for his family and loved ones, that they might have solace in their grief.

I agreed with little of Kennedy's politics, and regarded him as hypocritical in that his wealth would insulate him from the effects of the liberal/progressive programs that he famously espoused. He was the archetypal "limousine liberal." I also didn't think much of his character, what with stories of cheating in college an law school, philandering, support for government-paid abortion while claiming to be Catholic and of course the Big Issue, Mary Jo Kopechne.

All that said, however, he was probably the last liberal who understood that sometimes you need to listen to the other guy and compromise in order to craft legislation that (a) could get bipartisan support in Washington and, (b) be acceptable to a large plurality, if not a majority, of ordinary Americans. Given the penchant of the voters in Massachusetts to elect extreme lefties to federal office, I fear that whoever replaces Mr. Kennedy in the Senate will be much more along the lines of John Kerry, Harry Reid and Barack Obama than, say Joe Lieberman, Claire McCaskill or Mary Landrieu.

The nation has suffered a loss, and we don't yet know how great it is. At least Kennedy was a known quantity who on occasion exhibited some common sense, and by all accounts he was personally a very likeable man. I'm not sure whoever the good people of Massachusetts elect to replace him will be either.

This Is Just Stupid!

Recently, while selling his health care overhaul to a group of rabbis over the phone, President Obama reportedly said this: “We are God’s partners in matters of life and death.”

I don't know how the rabbis took that, but to me that's dangerously close to Obama putting himself on the same plane as God. In short, blasphemy. I'm sure that four or five centuries ago that remark would have gotten him burned at the stake, or worse. Thankfully, we live in a more enlightened time in which we believe that God will punish crimes against Himself, and men only punish crimes against other people. I prefer to ridicule anyone who claims to be God, or God-like. If ever anyone made an utterance that was more revealing about his personality and self-image I don't know of it. Of course that remark Mr. O made about the heavens opening up and a light shining down and inspiring the awed to say "I've got to vote for Barack" comes pretty close.

I believe it is politically stupid for any politician to compare himself--or even come within a mile of comparing himself--to God. To me this remark demonstrates how desperate Mr. Obama and his followers are to get backing for his health industry overhaul. It also no doubt demonstrates the attitude that the government bureaucrats will have if and when Obama's program becomes law.

In his recent Afterburner piece at Pajamas TV, Bill Whittle talks about the power of iconography, and introduces the following bumpersticker: 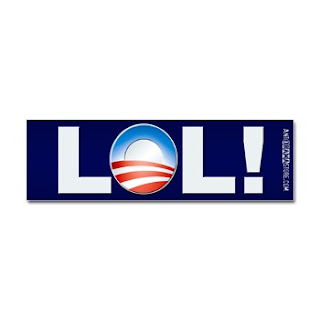 You can purchase that bumpersticker here.

I think Mr. Obama richly deserves the ridicule embodied in that sticker, and I predict that you'll be seeing quite a few of them on the road in the weeks ahead.