A British teacher in Sudan asks her class of seven-year-olds what to call their teddy bear mascot, and the kids vote to name it "Mohammed." As a result, the teacher is convicted of the crime of "insulting Islam" and is sentenced to 15 days in a Sudanese jail and deportation. She could have received 40 lashes under Sudanese law.

According to the Daily Mail, thousands of Sudanese protested in the streets of Khartoum. They weren't protesting on the side of the teacher--no, they were wielding knives and clubs, screaming for her execution.

I am gravely concerned about how Western Civilization and Islam will be able to coexist as long as this kind of thing keeps occurring. Some refer to a "clash of civilizations," but that requires the existence of two civilizations. I'm not sure the Sudanese reaction qualifies as representing any civilization.

God help the world if Christians, Hindus and Buddhists should decide that "an eye for an eye" is a more appropriate reaction to Islamic fanaticism than "turn the other cheek."

may be found immediately to the left, in the "Thoughts" column. I ran across it today in Webster's New World Dictionary of Quotations. I thought it particularly apropos in light of today's activities in Annapolis and the ongoing activity in Iraq and Afghanistan.

Remember during the Clinton administration when the Chinese imported sophisticated CNC machining centers (link is to a PDF file) from the US, and defense hawks were upset?

At the time, the machine tools, which were intended to be used to produce parts for commercial aircraft, were diverted to a factory that produced parts for military aircraft. I remember a reference to similar machines being used to shape submarine propellers. Precision-shaped propellers don't cavitate as much and as a result don't make much noise.

The Cox Report, portions of which are available here courtesy of the Washington Post, contains the following paragraph:

During the interagency licensing process for the machine tools, the Defense Technology Security Administration also sought assessments from the Central Intelligence Agency and from the Defense Intelligence Agency, because of concerns that the PRC could use the McDonnell Douglas five-axis machine tools for unauthorized purposes, particularly to develop quieter submarines. Since the PRC wishes to enhance its power projection capabilities and is making efforts to strengthen its naval forces, the five-axis machine tools could easily be diverted for projects that would achieve that goal.

To be sure, the machine tools were dual-use, and it's likely that the Chinese could have obtained equivalent technology from European sources, but that still is no reason why our government should have been so lax in giving it up.

I have no idea whether this has any connection with Chinese residents of the US having such an apparent affinity for the Clintons, but I think it's probably worth looking into.

Race to the Bottom?

The Senate is unable to pass a bill funding the war effort because the Democrats insist on micromanaging the conduct of the war by the Administration by setting troop withdrawal deadlines, and the Republicans insist on a "no strings" approach. Democrat leadership now says they won't even bring up a new bill until January.

Defense Secretary Gates says the lack of funding will have significant harmful effects on Army and Marine Corp operations. According to the linked story:

As a result, [Gates] said he is faced with the undesirable task of preparing to cease operations at Army bases by mid-February, and lay off about 100,000 defense department employees and an equal number of civilian contractors. A month later, he said, similar moves would have to be made by the Marines.

This kind of unserious behavior in Congress suggests to me that the Congressional leadership is involved in some sort of contest to see how low public approval ratings can go. I wouldn't be surprised if the next poll finds them deep into single digits.

Given the relative good news out of Iraq in recent weeks I have become convinced that the Democrat leadership is absolutely committed to lose the battle for Iraq. One would think that indications of success would result in an easer time for troop funding, but instead it has gotten more difficult. Reid and Pelosi are talking the same way they were a year ago, yet conditions on the ground have changed markedly for the better.

I suppose the Dem leadership could be thinking that they could pin any loss in Iraq on Bush, but that suggests a pretty high level of contempt for the intelligence of the American voting public. Maybe they feel like they have to draw a line in the sand (again), and plan on backing off if public reaction necessitates it, but that just makes them look stupid to anyone but the extreme left loons that they appear to be pandering to. Perhaps George Soros really does own the Democrat Party, and they're just dancing to his tune--I don't know--but to paraphrase Daffy Duck, I think they're "desthpicable."

I first posted this on Veterans Day 2005. I have decided to make this an annual tradition on this blog (with amendments). I am very pleased to report that the "old soldier" is doing very well, all things considered. He will be 88 on his birthday next week.

To My Dad: A Veterans' Day Tribute 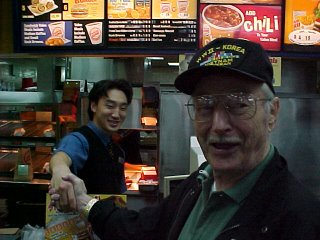 My dad retired from the US Army in 1972 after 30 years of service to his country. Not too many can honestly wear that baseball cap he has on (it says WW II - Korea - Vietnam Veteran), and membership in that elite club gets smaller with each passing year. Once again, I honor him today for his service.

Pop retired as a Command Sergeant Major. He was in the Medical Corps, and achieving CSM rank was probably a higher hurdle for him than for those serving in the combat arms. He achieved much and overcame many obstacles. In his own way, he is as courageous as any combat soldier.

Since retirement he has lived in Japan. This picture was taken (I believe) at Camp Zama in 2003.

Thanks, Pop, and thanks to all your comrades in arms who have served or are serving (including my two sons), living and dead, who have sacrificed and are sacrificing so much so that we may enjoy our freedoms.

God bless you all!

The current buzz about Sen. Clinton's inability/unwillingness to take a stand on NY Gov. Spitzer's plan to issue driver licenses to illegal immigrants provides an opportunity to talk about a notion I've had for quite some time.

Does anyone, supporter or opponent, really know what policies President Hillary Clinton will adopt on any subject? I think not. Based on her prior behavior, I believe it is safe to assume that a Hillary administration will lean pretty far left--think as a starting point the UK under Labor governments pre-Thatcher--but where will she stop?

It will be up to the Congress to protect the Republic from executive excesses, but if Hillary is elected with "long coattails," and given the current center of power in the Democratic Party (i.e., Kos Kids and George Soros) I can only hope that she won't have a veto-proof majority.

To quote multiple Star Wars characters, "I have a bad feeling about this."

The waterboarding issue in connection with the confirmation of Judge Mukasey is 100% bogus.

The Legislative Branch has the power to pass a bill that would make waterboarding unqualifiedly illegal. Even if Bush vetoed such a bill and the veto were sustained, it would, I believe, give so much credence to critics of the United States, both domestic and foreign, that waterboarding would never be used, or if it were used, it would literally be in the situation where a nuclear bomb was known to be in an American city, and ready to detonate, and a terrorist in captivity was strongly suspected of knowing where it was. When millions of civilian lives are at stake, it would be appropriate.

What is clear from the Mukasey confirmation brouhaha is that those who want the Judge to declare the procedure to be illegal before being sworn in as AG don't have the political courage to take action themselves. How do we elect such gutless wonders to high office?

I don't know what other Presidents would do in that situation, but if I were in that office I would do everything in my power to get that bomb disarmed and/or the population evacuated, including waterboarding, whether or not illegal. On very rare occasions the stakes are so great that the end does justify the means, but only, in my view, in a situation that is equally as dire as that postulated above.