Hypocrisy On The Left (Surprise?) And Commentary Thereon

San Francisco's City Lights Bookstore, once renowned for being a champion of freedom of expression, won't carry anything by Oriana Fallaci. "We don't carry books by fascists," sneers the clerk.

I used to live in the Bay Area, and I used to love San Francisco, but the whole city's gone so far around the bend that you'd have to pay me to go there now.

Credit Austin Bay for the pointer.

The predictable brouhaha has erupted over the Administration's decision to allow Dubai Ports World, a company that's owned by the United Arab Emirates, to acquire the Peninsula and Oriental Steam Navigation Company, a UK firm that has contracts to operate six major US ports. According to the Administration the UAE has been an ally in the GWOT and has supported the US military by providing port facilities for Navy ships and airfields. The UAE is in the southeastern quarter of the Arabian Peninsula and occupies the southern shore of the Persian Gulf, directly south of Iran. It contains the ports of Dubai and Abu Dhabi. From a strictly geographic standpoint, it seems to me that if the UAE is our ally, then we ought to exert ourselves to make sure they remain our ally.

I have no qualms about the deal with respect to port security. As the Administration has pointed out (quoting from a Fox News story), On Wednesday, presidential adviser Dan Bartlett said that security for the ports will remain with the United States.

"The physical security of the ports is at the charge of the Coast Guard. The actual cargo that comes in on the ships, is ... charged to the United States Customs Service. So it's critically important for America to understand that doesn't change — not today, not tomorrow, not next week, not six months from now. They are in charge of the security of our ports," Bartlett said.

My concerns are twofold. First, what happens to the profits that DP World earns from these operations? Although the UAE might be our ally against Al Qaeda, that does not necessarily mean that they don't wish to achieve the same end--i.e., a worldwide Caliphate. As someone a lot smarter than I am pointed out, the major difference between Wahabbism/Salifism and other less radical schools of Islamist thought is in the means taken to achieve the triumph of Islam. If the Emirs of the UAE do in fact desire a worldwide Caliphate, wouldn't they be inclined to use the profits reaped from the infidel West to finance their religious/political ends? (I may be wrong, but in my understanding, in Islam there is no difference between the religious and the political, because the Koran, being the word of God as spoken through the mouth of the Prophet, is the perfect and immutable source of all law.)

My second concern is how will the information gained by DP world on the detailed operations of the US ports be used, and how will it be protected? There's no way you'll ever convince me that every single person of power in the UAE is dead set against al Qaeda, and all it takes is one person with access to information to give it to the likes of bin Laden and Zarqawi, especially since the United States will have little or no control over such access. The implications of this kind of security hole are immeasurable.

I recommend to you Michelle Malkin's blog post on how the deal was financed. I don't always agree with Michelle, but she's smart enough to be pretty sure of her facts, or at least the reliability of her sources, before going public with her opinions.

So, while I understand the value of having the UAE as an ally against al Qaeda and its ilk, I think it would only be prudent for Congress to look into the process by which the transaction was vetted by the Committee on Foreign Investment in the United States, to make sure all the rules were followed, all relevant concerns raised and addressed, and that no conflict of interest existed among the members of the Committee.

Scott Johnson at Powerline points to this article in the NY Sun about a former USAF investigative officer who found four sites in southern Iraq that he believes contain WMD, specifically chemical and/or biological agents. He reported the existence of the sites to the Iraq Survey Group but they never investigated the sites, according to the investigator.

The sites were buried concrete bunkers near Nasiriyah and Umm Qasr, all of which had tunnel entrances which had been flooded via canals specifically created for the purpose. 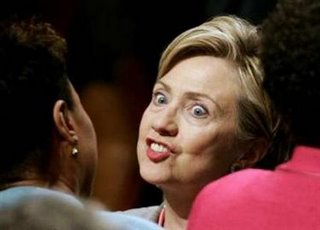 The accompanying photo of Senator Clinton (D-Amityville) was the subject of Wizbang's caption contest last weekend. 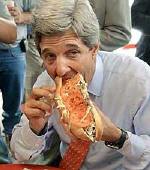 Poor Hillary--the camera is almost as unkind to her as it is to Sen. Kerry.

Later Than We Think

Arnaud de Borchgrave has a chilling opinion piece at the Washington Times online site. He says Iranian President Mahmoud Ahmadinijad professes devout belief in the imminent return of the Twelfth Imam, called the Mahdi, who will rule the world in absolute peace and justice following a time of war, pestilence and chaos reminiscent of the Judeo-Christian prophecy of Armageddon. What's more, Ahmadinijad sympathizes with, if not being a member of, the Hojjatieh Society, which believes that the return of the Mahdi can be hastened by human action to create chaos on earth. This man is not one who can be depended upon to act rationally, as we in the West understand the term. Having his finger on the nuclear trigger, which will occur if the rest of the world doesn't act to prevent it and may occur in any event, is not good.

This is kind of old news for someone who's been paying attention, but when someone with de Borchgrave's reputation highlights it, it tends to make one sit up and take notice. For your convenience, a short bio of de Borchgrave is here.

Go read the whole thing. You need to know what kind of man is leading Iran.